In the seminal novel Dune, people are tested by sticking their hand in a box that simulates great pain. If they remove their hand from the box they are immediately killed with a poisoned weapon called the Gom Jabbar.  If you pass the test you are declared a human instead of an animal, the theory being that the difference between the two is the ability for the human brain to override the "lizard brain" underneath our conscious awareness.

In the middle of a global pandemic I discovered Cheddar Chex Mix.  The bag opens and the smell wafts into my sinuses. Nothing can then prevent the consumption of the materiel save the depletion of the inventory.  Oddly enough this reminds me of meeting my wife.  Unlike my wife, I don't keep Cheddar Chex Mix in my home anymore.

In Brandon Sanderson's epic Stormlight Archive series, semi-spiritual beings called Spren, embody concepts like dusk and joy.  The largest are like continental plates buried in the earth, slowly sliding from place to place, bringing subtle but impossible to avoid despair and grief to those above.

In Malcolm Gladwell's oft-overlooked collection of essays on the financial crisis he meets a goose who has come into a whole field of grain all to itself.  The goose gorges itself until it is literally so large it can't fly away and is promptly eaten by a coyote.

Katie and I have traveled to a lot of places together.  I've traveled to even more by myself.  Doing this makes you realize how many of the hard edges of life have been smoothed off and sanded down in America.  Nothing is hard.  Parking is plentiful.  Cashiers make change for you. Bathrooms are free and 100% of them have an actual toilet and not a hole in the ground.  Cars never just can't fit down a street.  2,000 calories is never more than $5 and 5 minutes away.

"Well, that is obviously not completely true".

There are many theories for the complete loss of control of our body weights in modern society.  It is happening in almost every culture around the world. It is happening to farm animals and lab rats. Rich and poor are impacted (although poor disproportionately, like most societal ills).

Is this problem caused by individual behavior? Have our mental disciplinary physiognomies been eroding slowly and mysteriously for decades until only the Sphinx's soft round nose remains where once before stood crisp, lined beauty?   Violet Beauregarde, Augustus Gloop, Veruca Salt, and MikeTeavee just needed to keep themselves in check as they wandered through Wonka's Waffle Horror House?

Or is there some underlying headwind that makes that ever harder?  Wonka's chocolate mill was crafted to relentlessly thrash until the chaff turned to dust.

What happened?  Probably not one single thing.  Probably just a change here and a change there and under mounting pressure more of our will walls started to leak around the edges. If we were stronger we could stand against it.  Many do.  But just under half of us now have nostrils submerged, we fear forever.

While human will-power may play a (leading?) part we can be confident that every human pre-1970 wasn't uniquely iron disciplined but now some plurality of us has magically transformed into animals incapable of delayed gratification. And yet it seems only human will-power stands any chance of turning the tide for any single victim.  But that's never enough.  Not for me, anyway.

It could be the weaponization of cheap, craveable foods like the bacon egg and cheese biscuit and Easy Mac and pints of Phish Food ice cream.   It could be the complete and utter travesty that is the 30 year reign of the food pyramid.  It could be 100% exposure to air conditioning moves the insulation requirements of our bodies in the wrong direction. It could be some new chemical pollutant or combination of isotopes that is now ever-present in the modern world.  It could be a gene that could never survive when life was harder but now that some condition has changed conveys some advantage, somehow.  It could be the drop in casual tobacco burning in places like teacher break rooms and airplane rows and lunchrooms which subliminally suppressed our appetites.

Whether it is internal to the individual, an effect of the environment, or some combination of the two, the innate weight setpoints of 40% of us have moved.  Via herculean effort we can live below those setpoints for a time. But the moment we stop heaving the boulder up that hill our bodies roll right back to that setpoint.

We are 40% of America today. And that percent has not yet peaked.  Other countries are ahead or behind us, but almost all are drifting in the same direction as us.

For those of us who are in that 40% it is extremely frustrating and pushes us into dark boxes of self hatred and jealousy.  Like a vampire I am invisible in mirrors, whenever possible.  "Why me", "What is wrong with you",  "You are such a fat bastard", and on and on and on we castigate ourselves.

This is not me asking for your pity for me. Or for us. I'm just explaining. Your pity doesn't help us.  I don't know how you can help us. But I do appreciate your empathy. Always.

This is an unsolved mystery.  The day to day mechanics are extremely well understood.  Eat less.  Move more.  It is just that simple.  And that is simply more unhelpful than ever. That knowledge is not solving the problem and so I ask if it is true knowledge at all? 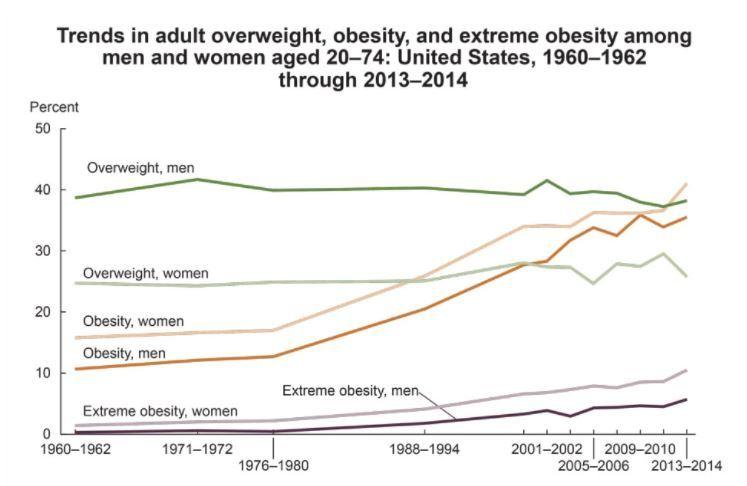 There's Something In The Water

Theory: There is evidence of some sort of obesogenic chemical in the water supply...

The first mystery is the epidemic itself. For most of history, the obesity rate was about 1%, even for people who had all the food they wanted. Today, many countries are 40% obese or more. Even in lean countries like Italy, France, and Sweden, the obesity rate is around 20%.

The standard American diet meanwhile, passed the 8% linoleic acid threshold sometime between 1960–1990, right around the same time that the obesity epidemic began.

Rebuttal to There's Something In The Water

People don't appreciate how much food has changed. Food has never been more calorically dense or more delicious. Modern processing techniques have perfected food to incredible new heights of flavor, variety and caloric density. And food scientists don't aim for just flavor, they aim for craving. Craving is an altogether different beast than just flavorful.

Editor's Note: We welcome another new outside voice this week to provide some dynamic counter balancing to the boys. Please give a warm mark as read welcome to JD. We sent JD an early draft of the opening essay of this issue and asked him to provide some centripetal swing.

So….. Brian’s drafted in a first time guest host- one he knows is as libertarian AND personal responsibility believing as just about anybody out there- to add a few comments about The Fat Issue of the weekly blog. God help me. This may be a one off.

There’s tons of studies on obesity and tons of fad diets out there; almost as many of each as there are morbidly obese people according to the charts in the links at least. I suspect that there’s likely something to the research into the various chemical and metabolic processes that various foods cause in the body, and how the modern ‘Merica diet incorporates many of the worst possible inputs.

As Brian can attest, I spend an inordinate amount of time trying to figure out what’s really important (and then making bullet point list): so what I’m mainly struck by in the discussions of various fad diets is:

b) how little focus there is in most cases on calories and the measurement of calories.

Particularly B. It’s like we don’t want to talk about the basics if they’re even slightly uncomfortable, and we are willing to look right past the obvious in search of something more clever (sort of like Paul Krugman does with any issue). Anyway, lots of good links in this issue…. But don’t forget the obvious. -JD

The Hacker's Diet aka Calories In Calories Out aka CICO works. I lost 80 lbs a while back and kept it off for 5 years. The laws of thermodynamics are undefeated... energy has to come from somewhere. Makes sense to me as the underlying mechanic. But I find it not satisfying when applied to the broader problem. -B

Just for fun, I had my brother Tim (who is a Latin scholar) make up a definition of Brian's wonderful made-up word, "solipsoid". Tim's definition of solipsoid and the reasoning behind it is as follows:

It's a combination of Latin words. Oid is like, ips is self, sol is short for solus which is alone. So I would say Like Itself Alone if it's very literal.